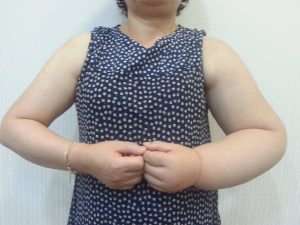 What Is Secondary Lymphoedema?

Contrary to the primary one, in the secondary lymphoedema the failure of the draining of the fluids in excess from the tissues it is generated as a result of a known cause.

Surgery - When lymph nodes are removed, as a result of breast cancer / mastectomy or for example a leg surgery to remove a melanoma, this generates a failure in the draining of the lymph. While in some cases the remaining lymph nodes compensate for the missing ones, in many others this extra work is not enough leading to secondary lymphoedema.

Any surgery that is not cancer-related can lead to lymphoedema even if no lymph nodes were removed. Regardless the type of surgery, the lymphatic system can be compromised or impaired during the procedure which can trigger the development of secondary lymphoedema.

Radiotherapy - Radiotherapy on the lymph nodes could cause their failure and consequent swelling leading to secondary lymphoedema.

Tumour - Malignant or benign tumour cells invading the lymph nodes can block the draining of the lymph and cause secondary lymphoedema.

Infection - Infection can affect the functionality of the lymphatic system and cause lymphoedema.

Trauma - Burns or wounds could damage the lymphatic vessels and cause secondary lymphoedema.

Filariasis - In some countries such as Africa, India, Malaysia, and Indonesia this is the first cause of secondary lymphoedema. Filariasis happens when some parasites, generally transported by mosquitoes, enter the lymphatic vessels causing their blockage. Deborah Fernandes is a Member of the Irish Society of Chartered Physiotherapist and the Clinic Director of PhysioFit Woman.

Deborah is a Leduc Manual Lymphatic Therapist and Lymphoedema Therapist. Although this specific method is given during University training, Deborah had the privilege of training directly with Professor Albert Leduc in 2004, 2009 and 2015 and is now the Representative of Leduc's Method Training for Ireland and UK

Her clinical Oncology Physiotherapy placement was held in the Portuguese Institute of Oncology, a reference Hospital in Portugal dedicated in providing cancer care since 1923.

Deborah also holds specific post graduation training in Face and Body Aesthetics Physiotherapy (Functional Dermatology Physiotherapy) which is crucial for any breast reconstruction after a mastectomy.

In 2013 Deborah completed the Pink Ribbon Programme with its founder, Doreen Puglisi enhancing her own Physiotherapy-Pilates programme.

With 20 years of experience in Physiotherapy at International level and specific training in Oncology Rehabilitation, Deborah provides Physiotherapy for post-cancer surgery including breast reconstruction, Lymphoedema Rehabilitation and Pilates for post-breast cancer patients